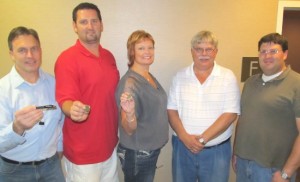 The 2013 Annual Meeting of the North Dakota Building Officials Association featured the election of the new slate of officers.  Pictured here are, from left, Bruce Taralson of Fargo, retiring Past President; Todd Johnson of Wahpeton, the new Past President; Christine Rose of Fargo, President; Steve Johnson of Grand Forks, Vice President; and Shawn Oradnik of Bismarck, Secretary-Treasurer.  Others elected to the Board of Directors were Darrael Zaback, at-large representative; Doug Lalim, southwest representative; and Scott Boura, northeast representative.  The three-day conference was held in Bismarck.  The membership meeting included planning for the spring training event April 2-4, 2014 in Grand Forks and the next Annual Meeting in Fargo on September 10-12, 2014.

Looking for Somthing on Our Site?